I did enjoy 2010 as well. The end of my secondary school life, the new experiences, the new friends and lots more. I'm going to keep all these as my memories. I really appreciate all the things that come to me with a beautiful smile :) Let's just forget about the past that make you sad. We must always look forward, there are still many things that waiting for you.

1. As usual, I want to loss some weight :/ I dont care, at least few kg. I do hope that I can do this during NS :D No add weight after I come back!

2. I will start my college life. I do hope that I really choose the right course that suit me :) And get into new environment with no regrets.

3. I want to earn money and get my license! Gonna try to get some job after I come back from NS. I dont want to get money from my parents anymore or ask my sisters to fetch me to anywhere since they dont really want to fetch me :/

4. I wish to buy myself a laptop. So, I wont rampas computer with my sister.

5. I'm officially 18 now :D I can do whatever I want except casino la of course xD Maybe try to go pub or clubbing with friends? Or drink beer? :D

6. Stay happiness. I wish to go through everyday with laugh :D At least I don't want to put an angry or sad face in front of others.

7. Wish my hair can grow longer. I want a new hairstyle laaa

8. Try to get myself more clothes since I only have few shirts. Seriously, I dont know why I got so less clothes :/ Everytime wear the same clothes make me feel boring.

9. I want to take good care of my skin. Try to sleep earlier and drink more water to avoid from growing pimples. * I hate pimples a lot!

10. Keep in touch with my friends. I still want to hang out and party with them like what we did last year :D


I don't think that's all my new year resolutions. But these are all that I can think now. LOL! Anyways, I will go to NS by tomorrow. This is my last post before I come back from NS. I will come back during New Year. Wish to blog more during that few days :D Hey visitors! Please wait me back ya! Do click on my nuffnang too :/ My 'income' becomes less from day by day. Do me a favourite okay? :D Thanks people! Love you all!
Posted by eminey626 at 9:35 PM 9 comments:

Yesterday was the end of the year 2010. Well, usually I will stay at home and celebrate with my computer. But yesterday was different. I decided to try something new, so I joined my friends to countdown at the curve :D It was really surprised me that my mum agreed to let me go :O Maybe because I have to go to NS already. LOL!


One of my friend counldn't join us due to some reason, I'm the only girl again for few hours :/ For my information, people will go desa park city or the curve to countdown. So, it means there must be traffic jam in this 2 places. As what I said, there was quite jam when we reached outside of Ikano. Oh yeah! Forgot to thank sinroong for fetching us to the curve. Driver must be very tired cause of traffic jam. So I must really thanks him :D


Back to the topic, we just simply found a place and parked the car without knowing where is it :O After that I only realised that was the building opposite the curve. We found our friends who reached there earlier than us and decided to have a special dinner. * Because of the end of the year D: But who knows, we walked here and there for almost 1 hour only found a place to have our dinner. 1 hour, pretty cool right? Some of the restaurants were fulled, some were too expensive, out of our budget :/

The Sanctuary, the place that we had our dinner. Seriously, I dont know this is a thai restaurant or what? We didn't know how to make our oder. At last, the driver decided for us. LOL!

They were busy playing with their hp :O 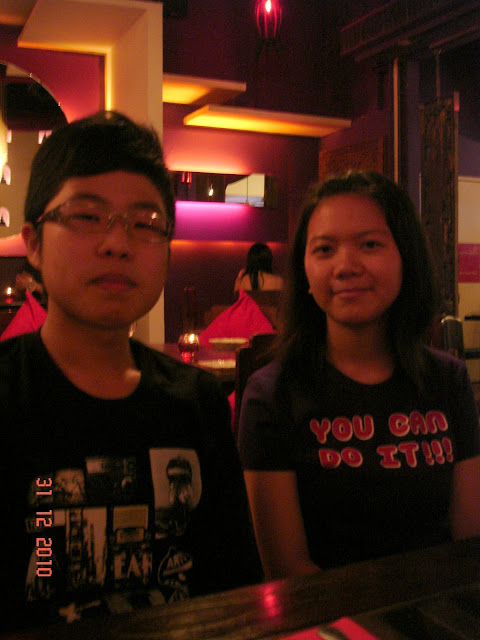 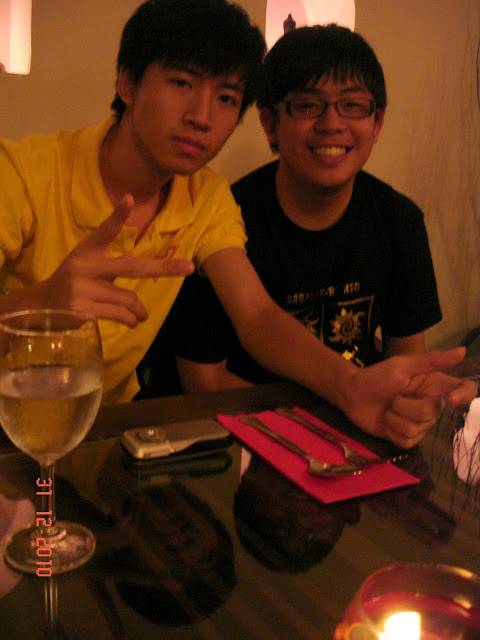 The driver, sinroong. He is really happy when he received the call :D

Overall was quite okay for me. But they still haven't full yet. So we decided to have 2nd around again later. Well, finally the one that I was waiting joined us after she finished her work. Unfortunately, we counld't find a suitable restaurant because some were close and some were fulled. It is really hard to find a restaurant and has our meal during special day :/ So, Jwen just bought a-bread-look-like thing from subway as her dinner :O Pitty her :(

Another friend of mine joined us countdown at the curve. When we were moving to the stage there, we were kept spraying by others at the middle there. At first, we kept hiding to avoid from that. But at last, we decided to attack people back. LOL! Thanks guys for buying the sprays and let us played too :D Although we kept sprayed by others and make us really wet but we still enjoyed during the countdown :D I didn't take any photos during the fireworks session. Busy enjoyed and avoided from the spray. Reached home by 1.30 a.m. without scolding by mum at all :O * Thanks another driver ( swing & kwansheng ) for fetching me back :D We are pretty lucky cause we didn't face any traffic jam when we went back. But the guys are damn pitty because they still jam in the parking when I already reached home. LOL!

With my bestie, Jwen :D See, our hair are wet :O

Thanks for asking me to countdown with you :) I didn't regret at all.

Seriously, this was the very first time I went out for countdown. What I want to say is, this is really fun! :D I want to party like this for more next time :D